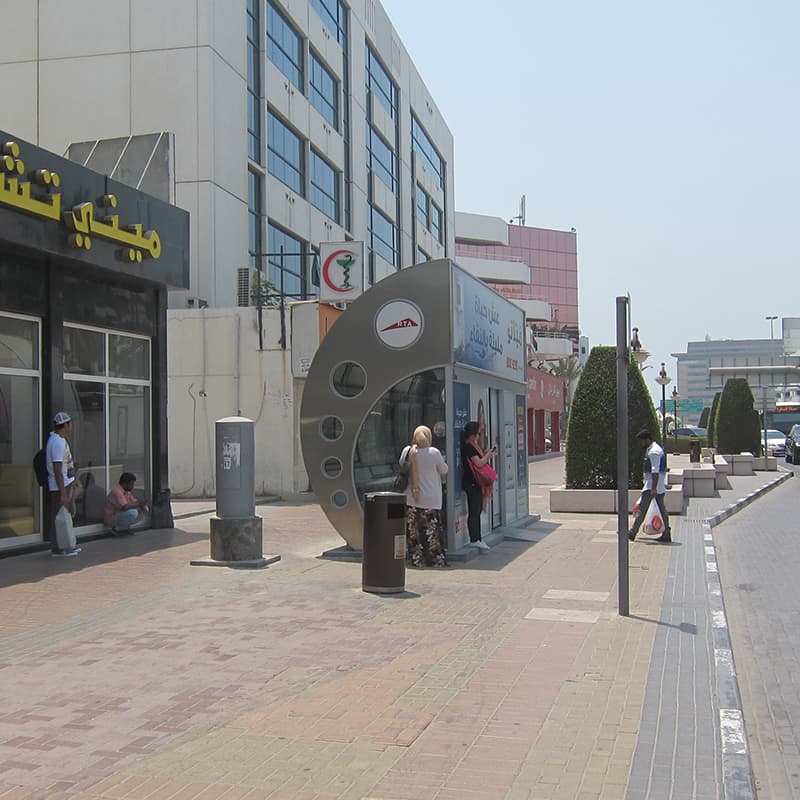 There are two types of bus stops in Dubai: the majority is the standard pole, with simple bus line information and time schedule and a growing number of air-conditioned stops, usually located in denser areas or along strategic public transport corridors. These stops were initially introduced in 2007 and they consist in an enclosed box with eight to ten seats, cooled in warmer months by a standard indoor air handling unit with external fan coil unit. Where ridership is high or expected to increase, two stops are installed aside each other, to double the capacity for waiting passengers. While these stops are certainly useful in the short term to encourage public transport usage and ridership increase, they will require some design review in order to be capable to accommodate the expected increase in public transport users in the future.

This review might not include just their shape or size, but a wider range of design issues that could profoundly change the role of the stops within users’ everyday routine. An innovative program called “Smart bus shelter” was launched in 2016 to introduce services within at least 100 bus stops, from minimart operating 24/7, to F&B outlets, to courier services. This is one of the largest bus stops retrofit attempts so far adopted worldwide, and it paves the road for further tests and improvements: Dubai should lead the research for a new type of stop suitable for metropoleis in very harsh climate conditions, re-imagining the relation between buildings, sidewalks and waiting areas for public transport users.