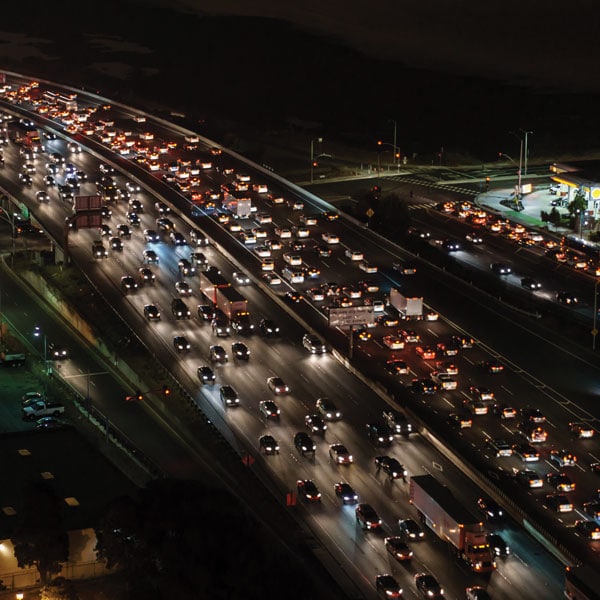 What cross-cutting trip data from five cities in the U.S. tells us about the overarching tendencies of moving within a zone versus traveling between zones across the city

From the cross-city data analysis, we could determine that trips made in all areas are predominantly external, ranging from 70-90 per cent of all trips made at any given time of day. Residential areas tend to have a higher share of external movements, while downtown and university zones demonstrate a higher share of internal movements than their residential counterparts.

In the following analysis, zone distinctions were based on a number of factors. For each of the five cities under study (namely, Seattle, Denver, Los Angeles, Austin and Savannah), areas associated with distinctive socio-economic profiles and their corresponding travel patterns were identified to create a basis for studying movements in and out of -and between- these articulated zones. The fixed zone typologies identified for each city were two attractor typologies (downtown and university areas) and two generator typologies (high-income and suburban residential areas).

The increase of internal trip share during lunchtime in downtown areas is around 5% on average in all cities, ranging from 7% in Los Angeles and Seattle to 3% and 2% in Austin and Savannah, respectively. However, these share increases are relative to the day average. Alternatively, when compared to the morning segment, Austin and Savannah observe the highest rises in internal trip share amounting to 85% and 80% rises respectively, compared to a 65% average. Put simply, internal trips almost double in the downtown areas of these two cities from morning to lunchtime.

In university zones, this relationship increases gradually from the morning hours to lunchtime, whereas in downtown the transition happens sharply around lunchtime hours (roughly counted as 12pm to 3pm). This is likely due to the differences between the nature of work and educational schedules, the latter being more flexible than the former, such that students and university faculty produce a higher number of short internal trips throughout the day.