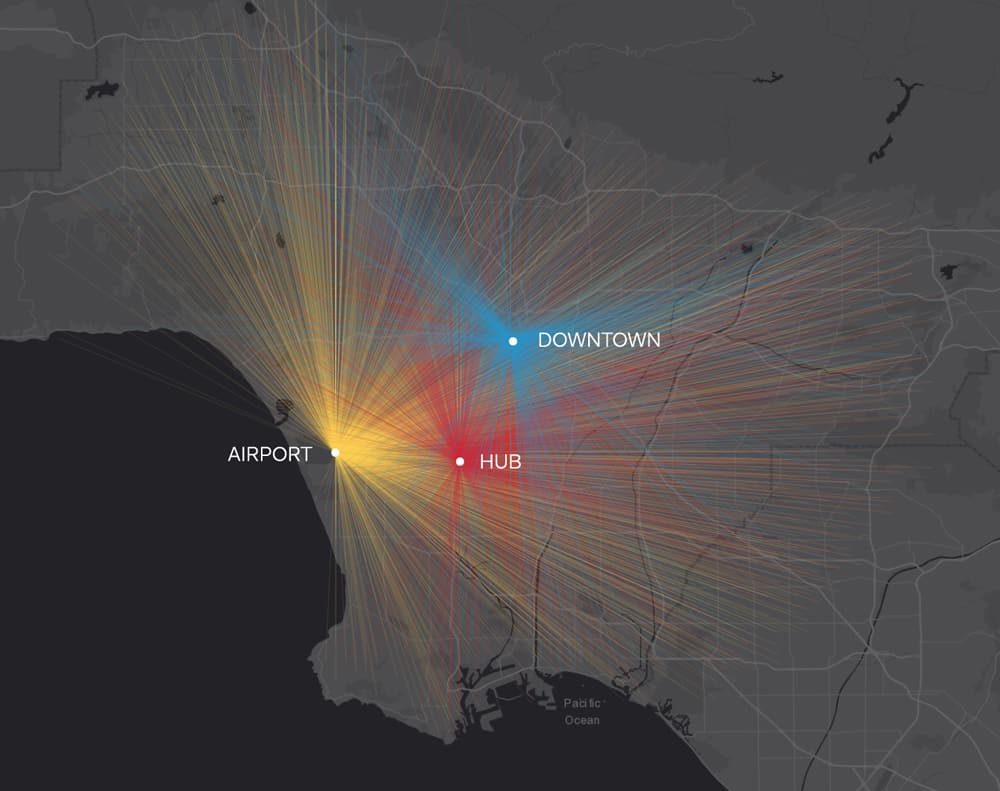 Predicting the movement patterns of driverless vehicles as a fleet which, as we all would like to imagine it, provides a mobility service with its own characteristics, capacity, usage, patronage, etc. imposes the need to reference this behaviour to a similar current offering.

In order to carry out this exercise, we firmly believe that there is nothing more similar than UBER, or any similar ride hailing service, to the mobility dynamics that the spread of driverless vehicles will result into in terms of travel demand patterns and mobility offering.

The motivations for this direct correlation are numerous:

• The driverless fleet is expected to be ubiquitous and spread in different parts of the city according to travel demand patterns and surges.

• The driverless fleet is expected to have very good response time in order to compete with other systems and provide a prompt service.

• The driverless fleet is expected to cover trips with a travel time that does not exceed 10 to 15 km.

• The driverless fleet will accommodate some travel purposes more than others, such as Home-Based and Non-home-Based Others rather than Home-based Work trips which are expected to rely on private/ public transit modes and less on ride sharing.

• The driverless fleet will not be owned by specific individuals however by mobility operating companies due to commodity and possible high costs.

The UBER movements platform openly accessible to anyone already includes movement information on a number of cities such as Boston, Los Angeles, Pittsburgh, San Francisco, Seattle and several others worldwide, such as London, Manchester, Amsterdam, Paris, Cairo and Johannesburg. Uber Movement is a tool that shares dynamic insights about traffic and mobility in cities where Uber operates. Uber Movement displays an Origin/ Destination matrix, hourly aggregate travel times, and other useful information for reconstructing and associating movements to a given city geography.

A few more reasons why we think that the available movement data on UBER are sufficient to build a case are listed below:

Sample Size | The total number of UBER trips per day worldwide and the markets/ cities where UBER managed to penetrate are considered sufficient for building a case. To mention some, UBER has 75 million users and 3 million drivers; UBER registers 15 million trips every day worldwide; UBER operates in 65 states and in over 600 cities; and, UBER employs more that 16,000 people. The above figures ensure a reliable and trustworthy sample size.

Vehicle Types | UBER has no limit on the type of vehicle that may join its crowd-sourced fleet. This enriches the offering and provides consequently statistical output regarding the different vehicle typologies that are used and the magnitude of their usage in different context, in different areas and at different hours of the day. The UBER classifications, i.e. UBERXL, UBER Black SUV, Black, Lx, etc. which reflects demand characteristics in terms of the number of occupants and their comfort/ luxury needs. Moreover, the UBER classification of vehicles also collects information on pooling and non-pooling dynamics which informs us about the users’ willingness and openness to sharing rides and bearing longer journey times for reducing travel costs.

The UBER movements platform openly accessible to anyone already includes movement information on a number of cities such as Boston, Los Angeles, Pittsburgh, San Francisco, Seattle and several others worldwide, such as London, Manchester, Amsterdam, Paris, Cairo and Johannesburg. Uber Movement is a tool that shares dynamic insights about traffic and mobility in cities where Uber operates. Uber Movement displays an Origin/ Destination matrix, hourly aggregate travel times, and other useful information for reconstructing and associating movements to a given city geography.

Travel distance will impact heavily the number of driverless cars that will be necessary for accommodating demand. The use of UBER cars is considered to be exploited very efficiently compared to the use private cars that are parked for nearly 95% of their lifetime. Another interesting conclusion might also be that travel distances are mainly dependent on the passengers’ willingness to pay for the transit service which defines the limit of travel distance and justifies the similarity between the two cities, as the maximum difference in travel distances between Los Angeles and Seattle is roughly half a kilometer.

UBER movements are also concentrated in areas with high Daytime Population. Daytime population refers to the number of people who are present in an area during normal business hours, including workers. This is in contrast to the resident population or people who reside in a given area and are typically present during the evening and nighttime hours (United States Census Bureau).

Correlating UBER movements and daytime population in 25 selected zones in Los Angeles and Seattle results into a high level of correlation in Los Angeles – 0.92 – and a medium-to-high level of correlation in Seattle – 0.76. Further research might be necessary to explore further the reasons why in some area correlation levels go down drastically and why in some others the relation is pretty direct. Despite this, the high correlation levels confirm that UBER is eventually highly requested by the daytime population and in areas which witness high numbers of daytime users.

As opposed to the three trip purposes classified in the last exercise that was carried out for predicting driverless cars’ travel patterns, an in-depth study of the land use characteristics of the areas that are affected by high UBER movements. Los Angeles was selected for this exercise and the three areas that showed the highest number of UBER movements were as follows:
• Los Angeles International Airport
• Harbor/Century Transitway Station
• Downtown Los Angeles
While the first and third highest areas were expected to generate a high amount of UBER movements, the Harbor/ Century Transitway Station area provided an interesting insight on the association between UBER movements and Public Transit service hubs. The transitway station is located in an area that is dominated by residential land use therefore it was concluded that the high demand was not generated by land use but rather by the fact that a number of transit lines, such as the green line, the silver line, commuter express 448 and several others, intersect in that area. This finding is rather interesting as it also sheds light on the complementary role between current ride hailing and public transportation services. Several had debated that driverless cars might compete with Public Transportation and consequently lead to its demise. We believe that the opposite might occur as we think that, similar to UBER movements, driverless cars will fill in the gap and provide a flexible and efficient transport offering that covers the last part of a journey.
Further explorations were carried out in order to understand if different travel distances could be associated to trips generated by a specific land use. To this end, O-D analysis for the same three above mentioned areas was carried out which showed interesting findings as the three areas gave three different average travel distances, as shown below:
• LAX Airport – Average travel distance 23.88 km
• Interchange – Average travel distance 17.95 km
• Downtown – Average travel distance 16.34 km
Airport movements result to be the highest as people reaching or leaving the airport need to take this ride despite distance. This apparently applies differently to the two other zones where the Public Transport interchange area results to be higher as again, for a similar reason but a different scale, users within a catchment area of roughly 18 km, passengers are willing to take this service for reaching interchange hub before shifting to another mode. Downtown results to be lowest due to a number of daytime movements mainly concentrated inside the city center which reduce the average distance to less than 16.50 km.

How can this affect the way we plan?

Assuming that the basic assumption of this article that driverless movement patterns will be similar UBER movements due to a number of similar traits and uses is right, a series of insights and interesting findings are concluded. From a planning point, this might be interesting for carrying out the following:

• Fleet size estimates may be supported through reference to average travel distance and time, daytime population concentration and surges, the number of per-purpose trips, and other traits in preparing early business plans by ride hailing operators venturing to run a driverless car fleet.

• Early pilot projects for implementing parking areas/ structures dedicated for driverless cars are most likely to be located in areas with land uses similar to the ones indicated above.

• If desire lines are clearly identified between origins and destinations for driverless car movements, then the mostly used paths can be predicted and consequently can be equipped with EV charging points, rest points and several other support services and amenities that will be essential for running the driverless vehicles.

• Areas with high driverless cars demand are the areas that most likely should start witnessing road diet projects and parking transformations as well as reduction or on-street and off-street parking provisions.