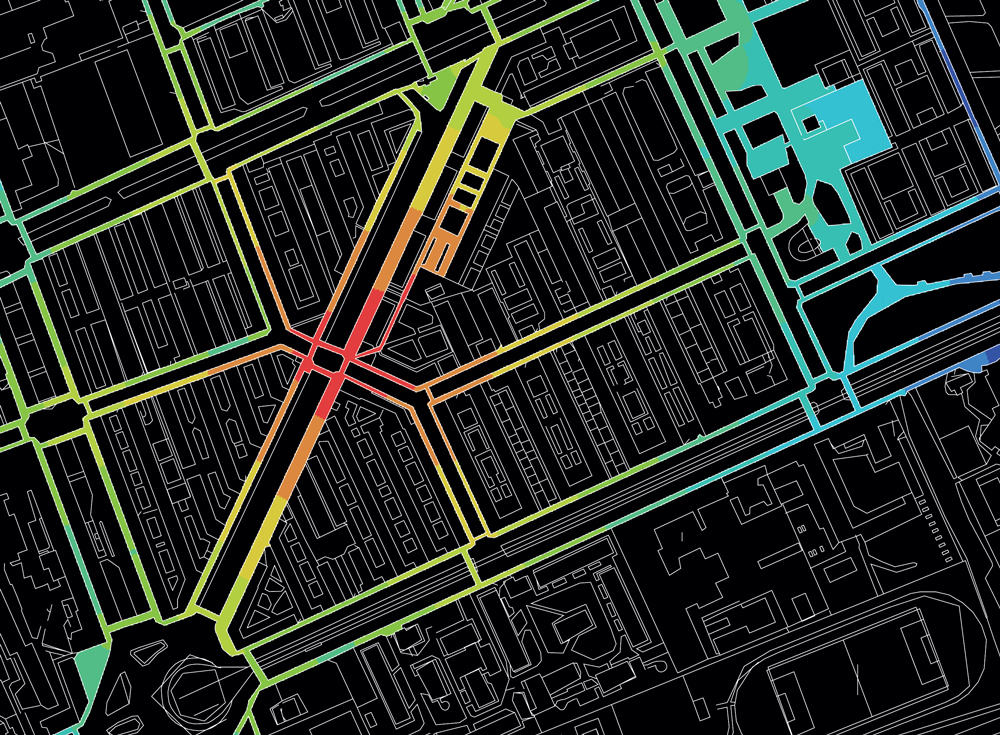 Giambellino isochrone map; in red the area reachable on foot in 1 minute; in blue those reachable in 10 minutes.

“Suburbs are the cities that we will leave to our children” Renzo Piano, Architect and Senator of the Italian Republic.

Over the last decades, the analysis of urban revitalization process has been at the centre of political and more technical debate as a concrete possibility to tackle the urgent issue of urban decline, affecting both the metropolitan scale and single neighbourhoods.

From a pure social perspective, one of today’s most critical aspects, which is an evident phenomenon in many worldwide environments, is the result of a large and articulated spectrum of combinations of macro factors and/ or location-specific drivers, with serious implications in all aspects of human life’s: physical, environmental, social, economic, health, historical and cultural. Regarding the pure social perspective, which emerges as one of the most critical aspects to face, often exclusion and marginalization, spatial segregation and the increasing concentration of marginalized groups come together with numbers of other issues, such as increasing unemployment and criminality, decreasing quality of dwellings and public spaces. Urban revitalization represents an effective multi-dimensional response to urban decline problem and the related social aspects are drivers for social equity, social inclusion, community building and community cohesion.

On August 30th, 2013 Renzo Piano was nominated Senator of the Italian Republic and, from the very onset of his mandate, he decided to embrace a creative and concrete role, by bringing his architectural and urban planning significant experience in his political responsibility and dedicating part of his civil and social commitment to the so-called G124 Think Tank. G124 involves a multi-disciplinary team of experts and six young professionals – architects, urban planners and engineers – whose primary aim is developing the future of our cities through an attentive analysis of identified challenges and the proposal for actual requalification projects of Italian urban outskirts, the most fragile territories. So far, G124 has operated in Rome, Turin, Milan, Venice and Catania.

The overall approach gravitates around the concept of “urban patching” (“rammendo” in Italian), according to which even small but well-designed urban interventions can heal existing urban “wounds” and, as revitalization “sparks”, trigger wider urban regeneration patterns and improve the quality of life. To this end, the requalification of urban brownfields and fill-in processes are encouraged to intensify the city by building on the built space and careful attention is paid to the evidence-based linkages between the built environment and urban society, the overall social well-being to include demographic, social and economic processes. With this respect, transport and mobility aspects represented key dimensions to tackle in order to: strengthen the effective connection between suburbs and city; avoid isolation, and; ensure convenient, safe and seamless relations to all citizens, both at a local and larger scale. Pedestrian friendly and accessible urban environments encourage social connections and, if designed to be appropriate for communities and people, play a significant role in the construction of social relationships and experiences.