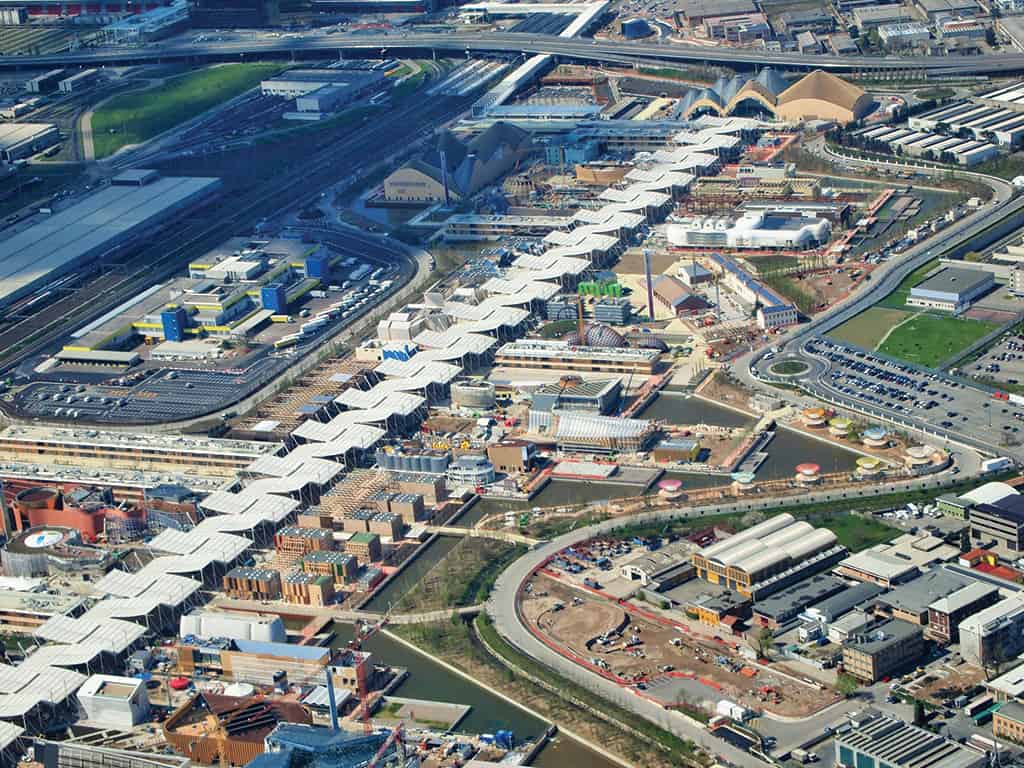 EXPO 2015 was a universal exposition hosted by the City of Milan with the theme, “Feeding the Planet, Energy for Life”. The EXPO spanned six months from May to October in 2015 and brought millions of visitors to Milan.

The event put Milan at the center of international attention. The average number of daily visitors during the last months of the Exhibition were around 140,000, with more than 250,000 people during weekends and other special exhibition days resulting in more than 20 million visitors over the course of the entire event.  The Exhibition involved 138 official participants, representing 86% of the world population, 67 enterprises and organizations of civil society, more than 60 Heads of State and Government, and around 270 delegations. The Expo 2015 site is located 15 kilometres northwest of Milan and covers an area of 1.1 square kilometres.

With respect to site location, within the infrastructural system, the level of accessibility that characterizes the Expo 2015 site within the regional and metropolitan context is directly related to the strategic location of Milan. Milan is emerging as a node of European importance within the articulated framework of Italy, Europe, as well as, international connections.

The site is easily accessible by line 1 of the Milan subway system, as well as greater connections with railway systems, including high-speed rail, regional trains, and metropolitan services. It also benefits from its proximity to strategic road corridors, such as the A8/A9 “Milano – Laghi”, the A4 “Torino – Venezia” motorways, and the West and North stretches of the ring motorway of Milan.

The Milan Innovation District, or MIND, was established in 2011 with the purpose of acquiring and converting the site that hosted Expo 2015 into a new urban reality. To this end, in 2017 a tender was launched for the urban regeneration process of the site.

Since then, Systematica has been part of the international team, selected by Arexpo, to reimagine the former site of Expo 2015. The Master Plan, developed by Lendlease, will provide Milan with a new paradigm for the city of the future.

The Milan Innovation District area will be transformed into a science, knowledge and innovation park with the purpose of creating a place open to the world. This redevelopment will promote territorial excellence by investing in technology, innovation and education, add value to the investments already sustained and build upon the Expo legacy. The science and technology park will be a hub for excellence in the fields of Life Sciences and Healthcare, Biotech and Pharma, Agri-food and Nutrition, and Data Science and Big Data. The site will be redesigned with modern architectural features to attract investment and generate economic benefits that will proliferate throughout the country with scientific, residential, and cultural functions. The site will include amenities to support activities in sport and leisure to benefit the greater community.

From an urban perspective, one of the main aspirations of MIND is to explore and test future models of living as well as future paradigms of people movement. With this respect, MIND is planned to act as international test-bed for some of the most disruptive and pioneering technologies and solutions on mobility.

The MIND mobility plan is focused on principles of walkable user-centric development and is shaped by an effective Mobility as a Service (MaaS) model, including the provision of e-mobility solutions, demand-responsive systems, intelligent-cognitive infrastructures, and future proofing-adaptive transport assets.

As part of the internal mobility model, a highly efficient Group Rapid Transit (GRT) system operated by autonomous shuttles is proposed to connect the railway station of Rho-Fiera station with East Gate of MIND. This GRT system will provide effective and convenient last-mile connections as well as facilitate an internal transport system within the MIND Park district and along the “Decumano”. Over time, this system will have the potential to evolve into point-to-point on-demand mobility service operated by robotaxi.

The potential driverless GRT system is considered complementary to traditional public transport. In the first phase, the vehicles will operate similar to a bus line, traveling along the central boulevard in both directions and stopping at fixed stops strategically planned along the route. The two-kilometre route will be covered in 6 minutes. The development of the site has been phased to accommodate future technologies and regulations that will spur growth and continually make the district an attractive site for investment. As investment and transport demand rise, the GRT System can extend beyond the boundary of the district and connect to other transport systems.

A preliminary operational scheme was developed as part of the MIND mobility plan. Specific shuttles were not chosen since the technology is still evolving. However, most autonomous shuttles have an average capacity of 15 passengers with a maximum operating speed of 25 km/h.

Based on the operations of vehicle charging, GRT service is planned to be continuous for 24 hours a day, with a frequency of every 3 minutes during AM peak and every 12 minutes during night hours. This frequency would provide reliability to travellers and a great benefit to the MIND Park.

An estimate in the number of vehicles was forecasted based on the route length, number of stops. The forecast took into consideration 8 working hours, 5 charging hours, and the possibility that one of the vehicles may be stopped for maintenance, and one must be available in case of breakdown or exceptional demand conditions (events, concerts, etc.). Therefore, the plan estimated 8 vehicles and 4 charging stations will be required.