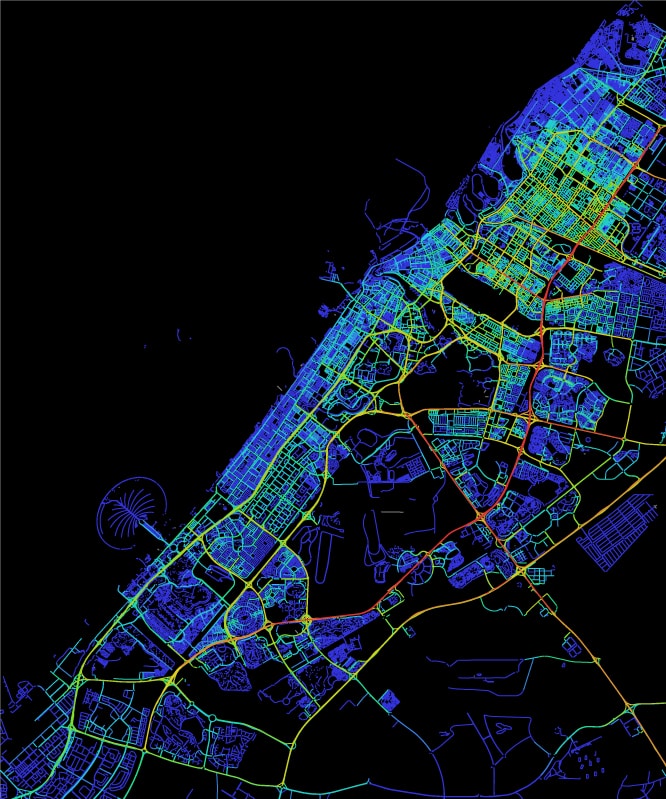 Since the late 1970s, network theories are used to study, understand and plan cities.

Very few urban theories succeed in describing our cities in such robust and convincing manner like Space Syntax. This discipline borrows graph theories from the mathematical domain and applies them to urban analysis, describing the city not as a sum of plots and land uses, but rather as a legible system made of nodes and relations. This tool is developed by Bill Hillier and other researchers at UCL in the late 1970s, while today it is further developed and supported by a much broader international community.

From a transport perspective, the most innovative factor of their work consists in describing convenient movements not just in terms of time or distance, but also the angular deviation from a straight route from origin and destination. The shortest path is therefore determined not only by metric distance, but also by relative cost of turning, whereby greater turns are costlier: this is confirmed by more than three decades of observations and studies, still ongoing, that generally people tend to move preferring intuitiveness to distance, especially on foot.

Angular Choice reveals the streets that are inherently the most convenient paths, when considering all origins and all destinations within a certain network distance parameter. High choice scores indicates a high potential for ‘through’ movement: these streets are inherently important parts of many different journeys. It is noteworthy that this reading is purely based on the spatial arrangement of streets, therefore does not take into account land use or traffic generators.

This is the ideal distance everyone is willing to walk on foot, and where walking is much more convenient than all other modes; the potential areas for being center of neighborhood activities are identified.

Increasing the distance of the analysis is possible to identify the most convenient routes for bicycles and other small electric vehicles, understanding strategic corridors to connect adjacent districts in a sustainable manner.

By setting the limit of the analysis to infinite (“n”), it is possible to preliminarily identify arteries convenient for long distance movements, therefore most likely by car or by bus at urban scale.